Skip to content
EntertainmentLeave a Comment on ‘I paid millions of Naira so they could release me’ – Rapper Milli blasts MI Abaga’s Choc City.

Former Chocolate City rapper, Milli who was mentioned in Vector’s diss track against MI Abaga has reacted to the track which revealed some damning inside information about MI and his Chocolate City imprint. 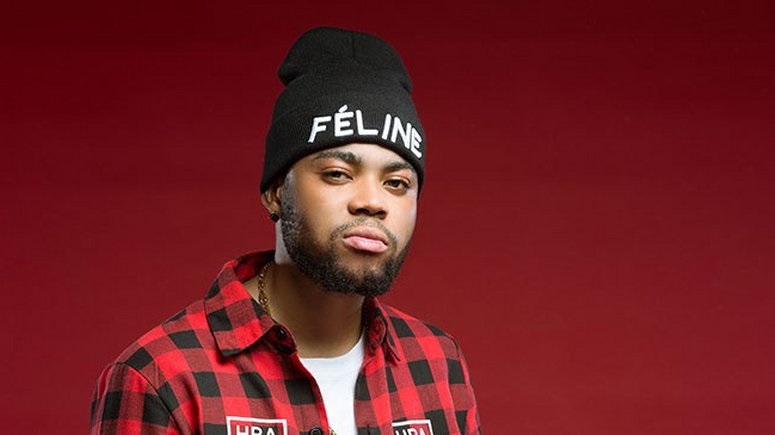 Milli while responding to reports that he was dumped by Chocolate City in 2016 wrote ;

‘I am sorry bro, I was never dropped from @choccitymusic I had to pay times three of what they said I owed em in 3 commas so they could release me, I bought my own contract I hope they tell you that someday’. 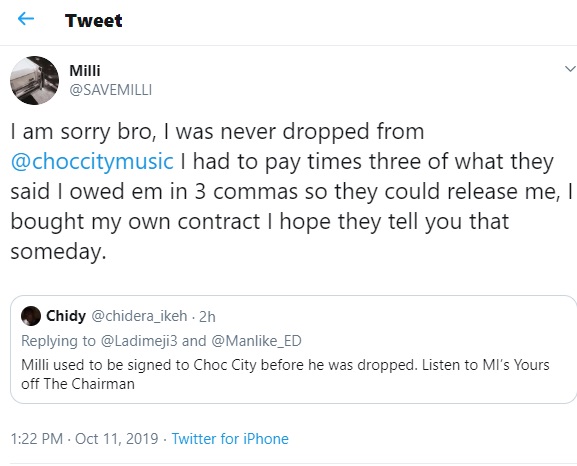 Back in 2016, during a topsy-turvy time with Chocolate city, Milli wrote 10 revealing things about M.I Abaga.

Chocolate City held him back

It’s no longer news that the time has come for me to move on from Chocolate City, but until now, no one has heard my side of the story.

I have a lot of love for my CC family, especially for Koker and Dice, but for me, things didn’t turn out how I thought they would at all… I was getting held back all the time, I wasn’t allowed to put out music like I wanted to, and it was getting really hard to be myself…

Chocolate City refused to let him release his EP

When Mr Audu left in February 2015 and handed over to M.I, I automatically became a Choc City artist. I was told dropping my EP under CC was going to be great for me so I was really excited. But there was a lot going on at that time, so attention shifted from my EP and I was told I couldn’t drop it for the next few months after the handover because I had to wait for the label to reorganise itself. In March, I figured out a way to drop music though, that’s how I started #FreeMusicFridays. But after three Fridays, they pulled the plug on it and said I couldn’t continue putting out free music…

When the handover was completed, we were asked to start putting together the TICBN album in order to promote the Choc City brand, so again I was told to be patient, and I was… I came up with the idea to drop the Childish EP on Children’s Day (May 27th, which is also my birthday), but no one at the label paid attention and M.I didn’t want me to drop it at the end of May because the TICBN Album would still being promoted around that time, so I had to be patient again.

M.I Refused to let him release his collaboration with Wizkid

I know some of y’all have been asking about the Wizkid feature and if it that was even true. Well, it did exist, and still exists. I did have a song with Wiz, which was also supposed to have M.I on it, but unfortunately he took it from me. M.I gave me a choice – if I wanted to put out Unlooking, I would have to give up the Wizkid feature. I guess nobody in their right mind would give up a feature with Wiz, but I did believe in Unlooking, and everybody around me wanted me to release it. Also, I didn’t want my first release to be a feature, and I knew I could always find him again, so I gave up the Wizkid track and prepared the release of Unlooking.

M.I made him change ‘Unlooking’ single from English to Pidgin

I created Unlooking in a really unique way. When I first wrote it, the verses were different, not Pidgin, but M.I asked me to rewrite the song, and had me change it from English into Pidgin, to be more “street”… so I did, even though I never enjoyed remaking the song. But I wanted to make him happy so I would get all the support I needed by the time Unlooking was coming out. Unfortunately, after so much time rewriting it, when I finally dropped the song, he didn’t support me and Unlooking wasn’t pushed.

He didn’t put much effort into promoting it, I could tell, and after Unlooking, all these new dab songs started coming out and the move that I had started was jacked from me… I saw M.I supporting Olamide’s dab and it really hurt me.

M.I wasn’t proud of him

He didn’t put much effort into promoting it, I could tell, and after Unlooking, all these new dab songs started coming out and the move that I had started was jacked from me… I saw M.I supporting Olamide’s dab and it really hurt me.

I thought M.I was ashamed of me. He was telling people that Unlooking was just 60% of what it could have been, and that the only reason people liked it was because it was in Pidgin. There was no budget for promotion, so I had to hustle by myself, but I am just one person and I can’t win if my own people don’t believe in me…

And all this while, M.I told me to be more like this or that artist, be more “street”, and people told me that he kept saying that my music wasn’t gonna fly in Naij… It’s like they had decided my sound wasn’t going to work before they even gave it a chance. It made me really, really sad…

Milli did not want to leave Chocolate City

In December last year, I met some cool and serious people that not only believe in me and my music, but they also want to see me shine. My new team wanted to work with Choc City but Choc City didn’t want that. All this while, all CC artists were told to build their own teams. And here I was, with a dope team that wanted nothing from the label but the opportunity to invest in me, and work on my promo and branding together with the label, and CC said no. They said “Either all us or nothing”. So what choice did I have? Sit and wait some more, or work with people who actually believe in me? I didn’t want to leave the label, but they didn’t really leave me a choice… So as much as it pained me to leave my fam behind, we started the release process in January…

M.I Attacked Him In “Everything I have seen” single

Not everyone is happy about my departure from CC though, and even for me, it wasn’t easy to make that decision… In “Everything” M.I. really went deep, calling me disloyal for leaving the family and so on. People in the label office stopped talking to me. It became difficult for me to work with Reinhard, my producer that I introduced to M.I. at the time we produced Chairman. They talked to radio OAPs and other media people and told them their side of the story, making me look bad and as if I don’t care about anyone.

And then it took almost five months to release me from the label, so I was stuck. Choc City was delaying me and crushed my vibe… My new team said I shouldn’t be on social media until things are settled with Choc City, so that they don’t change their mind about releasing me or delay us some more when they see how well things are going for me. That’s why I went quiet at some point. I didn’t even know what to say or post anyway, I was just really, really sad…

…And There’s More That Was Not Said

Much more happened than what I’ve told you, a lot of personal things that really disappointed and hurt me deeply, coming from a person I admire and respect so much. I won’t speak about details because I don’t want this to be about any of those personal things. That’s between him and me. #DontAskMeWhatHappened.

But I will never forget how I was put down again and again, how my confidence in my sound was broken, and how it was impossible for me to put out my music. I even stopped believing in myself at some point… Your messages all this while really helped me a lot and gave me new motivation. I felt your love and I’m grateful for that.